If you have several smaller or one larger project, you will soon discover that the GPIO pins of the Raspberry are fastly becoming too little. For all of you, this tutorial will show you how to use an I2C Port Expander to easily multiply the GPIO pins many times over.

In some situations, you may need more GPIO pins than it has outputs and you are at its physical limits. But there is a very useful port expander. On the use of one of these, we will discuss in this post.

For this tutorial you need the following hardware parts:

First of all, the setup of the microchips: As you can see the differences are minimal, for this tutorial it does not matter which one is used.

A little explanation of the main pins:

Accordingly, I have built a small circuit with 3 LEDs (as series resistors 330Ω).

(We require the button only in Part 2 of the tutorial.)

The first thing to do is to unlock the I2C in the Pi. The easiest way to do this is by means of

It is activated under “Advanced Options”> “I2C”.
For older versions of Raspbian, you also have to edit a file

and appends these two lines to the end:

Now the modules have to be removed from the blacklist file, otherwise, they will not work.

and put a # in front of the two entries.

Save again with CTRL + O and CTRL + X and exit.

So that we can address the I2C now, we have to install a few more packages.

Then shut down the Pi, wait a few seconds and disconnect from the power.

After everything is connected and all connections have been checked again, start the Pi and wait until it has started up.

If you have a Pi Rev.1, you must enter 0 instead of 1. The output looks like this:

The address 0x20 (hexadecimal) contains the I2C. If A2 were e.g. connected to 3.3V (A1 and A0 to GND), it would be addressable at the address 0x24. This is, as mentioned above, important if you have connected several port expanders in order to be able to address them clearly.

To address the LEDs, the ports must either be declared as input or output (Rev1 please adjust the user again).

Here are some examples that explain how the command works:

First of all the address addressed by i2cdetect is addressed. The second value is in this table (from the datasheet): 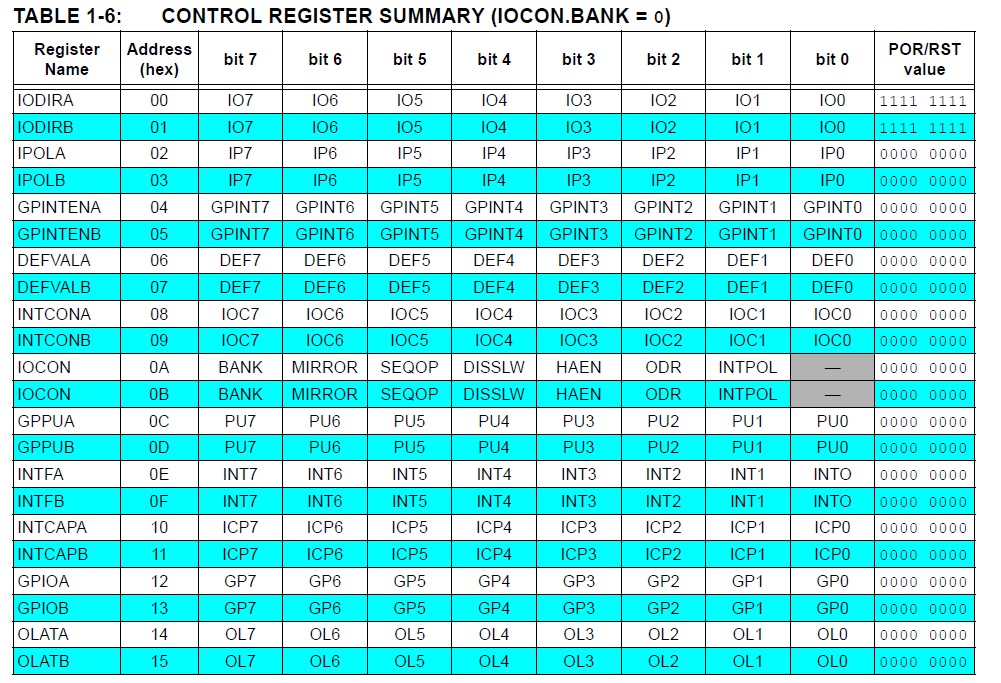 So we create a script

To start the script now, we enter

As soon as you press the button, the LEDs light up. By pressing CTRL + C you can cancel the script and return to the console.

As you can see, using it is pretty easy and you have created another 16 GPIO pins.